Dalwood House, in the historic Hunter Valley of New south Wales, is a National Trust (NSW) property and is also included in the Australian Government's Register of the National Estate.

There is no known record of the architect. It is more than likely that it was George Wyndham himself. He was old enough to observe and understand the details of the construction of his father's new home at Dinton and there are numerous similarities between the two buildings. However, it has been suggested that one of the Scott brothers of Glendon, may also have had some influence on the design.

Many details of the design are not sufficiently refined for a professional architect. The Greek style is certainly in keeping with George's classical education and interests. Some of his letters contain detailed instructions for the construction of the house and other buildings, supporting the idea that George was responsible for and in control of the building.

There is little doubt that Dalwood was never completed as intended by George Wyndham. Whether he aspired to build a two-storey building similar to his father's home, Dinton, or only a single storey can only be conjectured at this stage.

Columns were quarried for an imposing portico on the southern front of the house where the verandah is now. 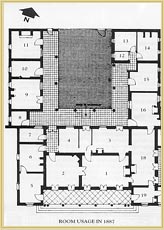 Dalwood is an expansive single-storey stone house built in the Greek Revival style, reminiscent of the family home at Dinton, Wiltshire. It consists of a long central block facing south with a wing each end and two rear wings projecting northwards to form a courtyard.

The external walls feature dressed coursed stone. Finely detailed gable pediments and corbelled parapets conceal an early attempt at flat roof construction. The roofs were formed by a 15 centimetre layer of earth on timber slabs and water-proofed with a 3 to 5 cm topping mixture of lime, oxblood and tar. After failing, a shingle covered pitched roof was built, being replaced later with corrugated iron.

Local stone was used for the construction of the exterior walls, Doric columns of the porch and internal mantelpieces of Dalwood House.

The stone is a very fine grained sandstone or mudstone. It was quarried at nearby Black Creek over which a bridge was specially constructed to enable the stone to be brought to Dalwood.

The bricks for the internal walls of the house, farm buildings and lining the wells were fired on site.

The red cedar used for the fine joinery was cut from trees on Mr. Edward Cory's "Gostwyck" on the nearby Paterson River and brought by dray to Dalwood in 1830. Red cedar was also used to make the wine casks at Dalwood.

Dalwood House is located within the grounds of the Dalwood Estate (previously known as Wyndham Estate Winery) at Dalwood Road, Dalwood NSW 2320.

Currently Dalwood Estate is open to the general public on weekends (2018).